The Y is open! Get more information on how COVID-19 is affecting Y programs and services here.

So if you know me, I can only be inside for so long. Even while walking to the mailbox lately, I have been stopping to admire the weeds coming up in our chicken scratched mulch/rock beds. I stop and pick up the little sticks along the way. The grass does need mowed at some point, but someone really doesn’t want to start mowing daily yet. (That’s all my husband. I tried it once and that’s a story in itself. Let’s just say, I managed to hit and move at least three rock barriers we have in the yard and mowed over grass the wrong way that the blades went right into the hill and just turned out dirt chunks. Maybe it was on purpose, but I wasn’t asked to mow again. ????)

So, since moving into a new place last year in the winter, I didn’t want to make any rash decisions about flower beds, mulched areas, what’s a flower, what’s a weed, moving the fire pit, adding on to the deck on so on. It was all the “we will get to it eventually” mentality because I know we’re not going anywhere anytime soon. But now, I’m obviously itching to get outside and make some moves.

The biggest hurdle is figuring out what to do with the mulched areas, because now the chickens just scratch everything in every direction to the bare bones of the earth, only to laugh at me I’m sure, when I grab the rake and go right back to pulling all of it back into its mulch mound. Right now, I’m bored enough I’ll take there “bawking” and fix it. FOR NOW!

Although I have a pretty good idea about what I want, I’ve been thinking about how to make the back yard/woods appealing enough to keep Calee entertained. She likes coming out and jumping on the trampoline, but once those “bees” (which are just the normal outside annoying gnats) get her she is out of there. So, I found this website, and some pretty cool ideas of how to add a couple kid-friendly, DIY projects where she can pick colors and the items to put there. 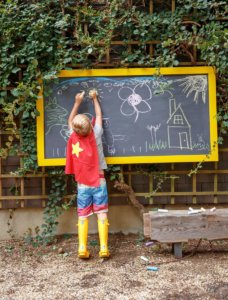 1) The large chalk board. Calee loves sidewalk chalk and I’ve thought about doing this in the basement in her playroom, but don’t want to instigate additional wall writing anywhere else in the house. She also does it on the driveway, but if we aren’t out front with her, she doesn’t want to do it. So, what better place than over by her swing set? We just need a board, screws and some black chalk paint and now she can create some artwork out back. 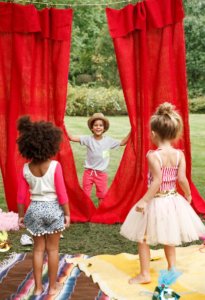 2) Summer Stage. In general, we always have music playing when we are outside. If we incorporate some curtains and bring out blankets or chairs, we will be saying, “Introducing Mommy Rose” in no time and the dance battle will begin. 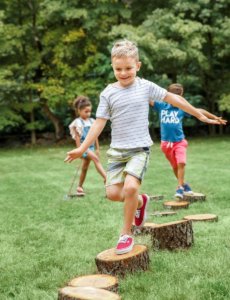 3) Stump Steps. We are surrounded by trees. This is easy and right now her favorite game is HOT LAVA with mommy’s couch pillows. This also helps her balance and she gets to do something obstacle course style. You could use chalk and put numbers on the logs and incorporate counting, math, words and even science if you leave the logs sit long enough. I bet if you flip them over, Mr. salamander will be under there. 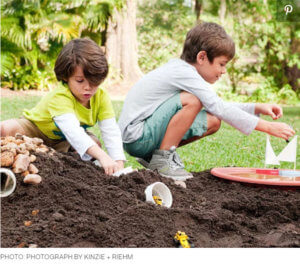 4) Outdoor play/dirt space. We have a combo of tools, trucks, PJ Masks, Barbies, cars, LOL surprises, dolls and even Peppa Pigs. You name it and somehow everyone takes a turn finding buried treasure, getting lost in the jungle (again high grass chunks that will be cut at some point), digging in mulch, jumping in muddy puddles, finding “gems” (aka stones), flowers, and it never fails they are in a finished “mommy area.” Now we can give an undone area for her to create a “buried treasure” spot of her own. They have PVC pipes with dirt over it to create tunnels, rocks, sand, dirt and even an old flowerpot with water to rinse off or dump if needed in an area. Even better I keep thinking of just dumping a bag of each in an area for a mound of possibilities.

During this time as trying as it might be for some including even me, I am grateful for the family time, the longer days, the simple and complex dinner conversations with a 5-year-old (including if you eat certain foods does that determine if you have a boy or girl baby), the looks of “are you ever going to leave” from the dog (and sometimes even from my husband), our family workouts and constantly getting beat at Disney’s Memory. I’m just taking it all in.